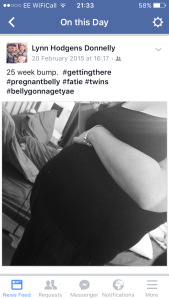 Well  it’s been over s week since my last post.  The reason being is I had an operation on  my arm. It’s been very tough. Dealing with the pain is one thing but having to deal with not being able to look after my boys is another thing.

If it it wasn’t for my family seriously I wouldn’t know how we would cope.

Anyway onto  to some happy news now.  My boys have featured on the front page of NHS Lanarkshires monthly magazine The Pulse.  It’s amazing. So proud of my boys including husband. As a result of this a reporter from The Sunday Post contacted us and they also want to run their story.  So the story has been written and a photographer came out yesterday and took the boys pictures.  We were expecting it to run today but unfortunately it must be next Sunday so keep a wee eye out for my superstars.

My wee lion cubs turn the big 1 this week.  Wow what a year.  Doesn’t seem that long ago I was taking the above pic and looking forward to the next stage of pregnancy. Then only 5 days later the boys made an appearance. The boys were weighed this week and Lewis is 19lb 7oz and Logan is 19lbs 15oz this just blows my mind. As they were 1lb 7oz and 1lb 11oz when they were born.  What a journey it has been.  I still hear the beeps of the machines at night   I honestly don’t think those sounds will ever leave me

I had my first case of overprotective mother this week also.  The boys had their neuro developmental check up st hospital. The Physio put cubes inside a cup and waited for Lewis to take these cubes out.  He picked up cub looked inside it and tipped the contents over the floor.  She then turns to her colleague and said he didn’t do it. I asked what she meant as I saw him do it as well as she did but apparently they were wanting him to pick the cubes out one at a time. I was like wtf???!! He did it. Just because it wasn’t the way you wanted it doesn’t mean he didn’t do it.  The Physio found this hilarious as it really got my back up.  She said ah there is the protective mammy lion coming out. Lol. Overall the boys did well. Lewis has the problem of trying to do things too fast and ironically Logan is the complete opposite. He is too laid back and had already developed the man job of rubber earring you.

So this week will be a very busy week of preparations for the big birthday. They will have a wee party at nursery on Thursday (their actual birthday) does anyone else send their children to nursery/school on their birthday? My husband doesn’t think we should send them but they enjoy it so much I don’t want to take it away from them.  They will also have a party at my parents on Saturday and hubs parents on Sunday.  The advantage of having a big family is it’s impossible to fit everyone so the boys get 2 parties.  Yay. 🙂