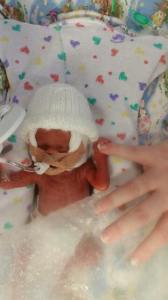 We are coming ever closer to a day that is very close to my heart. National Prematurity Day 17th November 2017. However, in the UK we raise awareness the whole month through. The charity Bliss ( Twitter – @blisscharity ) are this year focusing on Prematurity and what it means to you.

With 1 in 10 babies being born premature worldwide we need people to know what obstacles babies and parents come across each and every single day. Giving birth to a preemie baby has a massive ripple effect that’s not just felt by parents but siblings grandparents friends and even work colleagues. In the UK alone 95,000 babies are born premature or sick. Being born far too soon means the baby is at higher risk of longterm health problems such as Cerebral Palsy and even at a higher risk of requiring special education at school. This fact is particularly true for my boys just now. Logan was stuck on a ventilator and no matter what the medical professionals attempted they couldn’t wean him off it. Everyday spent on a ventilator damaged his lungs further and brought up more health risks. The consultant spoke to my husband and I about giving Logan steroids in order to get him off his vent. Seems a logical solution – go for the treatment that will take away the ventilator, This came with a massive but though. The steroid treatment meant that Logan would be at higher risk of developing cerebral palsy, this was magnified by the fact he had suffered a brain bleed at birth and was at risk of cerebral palsy due to his Prematurity anyway. The discussion we had that night when we got home was just awful. We felt like we were trapped between the devil and the deep blue sea. In any event, we decided to be proactive, charge ahead and deal with the consequences as or if they arose. Logan is now 2 years and 9 months old. This is where we are seeing his cognitive development is not where it should be, even giving him grace for his Prematurity he is no where close. So this has started the discussion between his health visitor, speech therapist and nursery personnel that they feel he may be better suited to a quieter, smaller learning environment with specialist teachers. This is not to say he won’t ever catch up it is just to give him the best chance to catch up and attend a mainstream primary school. I was also worried that even though he was walking that he may have a milder level of cerebral palsy. He walks with his arms flapping about in the air with no purpose. He seems to have hyper mobile joints especially his elbows and shoulders. He also a very clumsy boy and will fall over very big obvious obstacles. The health visitor seems to think this is due to a sensory perception disorder (SPD). So life is very much up in the air with regards to the boys cognitive abilities. All I know is I have a very supportive family and no matter the outcome those 2 little miracle lion cubs will be fully supported and loved more than the world by everyone.

On our first day in the NICU the nurse looking after my boys explained that this is day one of a rollercoaster journey. Whether your journey is days, weeks or months you will be pushed to every physical and emotional limit you have. Just as you feel you couldn’t possibly deal with anymore along comes another dip. Yet everyday you get up, get ready and sit by the side of the incubator of the most precious wee warrior you know. Just knowing that they are fighting hard is what gives you the strength to carry on. This little person who you made and brought into this world yet haven’t been allowed to touch never mind give a cuddle is what gives you the courage you need to continue on.

We spent a heartbreaking 118 days sitting Vigil at the bedside of our little lion cubs. Willing them on, celebrating every gram of weight gained and every ml of milk taken, until we were given the news that we could eventually be a family together at home. I remember rooming in with my boys and being terrified. Even though we were still in hospital I was their sole care giver. My husband was still working away through all of this with the hope of taking his paternity leave when the boys finally made it home. It was like a military style operation organising feeds, medications, nappy changes and oxygen and that was for just one baby never mind the two I actually had.

The thing I didn’t realise is that nearly 3 years later the rollercoaster would still be going up down and roundabout. I thought that ended once you left the NICU. Nope. It certainly doesn’t.

I have many many stories of our time in nicu but for now I will leave it at that. This has taken me quite a few days to write as even though a lot of Time has passed it is still very raw in my heart and I get upset thinking of my wee guys being so ill.

Please feel free to share your experiences of Prematurity or your child being born unwell with me. Together we can bring awareness to an issue no one thinks about unless it happens to them. We need to highlight the issues and get funding for research so other parents and babies don’t need to go through what we have experienced. Even though our journey was man extremely difficult one, my family had a happy outcome. Unfortunately, not every baby who is born early or unwell leaves the NICU. Some babies fight the good fight but the angels take them to a better place than this cruel world. There are also some babies who get to leave the NICU, go home and then due to medical complications of Prematurity become very unwell and pass away months or even years later.

Please keep those babies and parents in your hearts and prayers. Light a candle for them on the 17th November and raise awareness of a cause very close to my heart.